From bare land to grand living 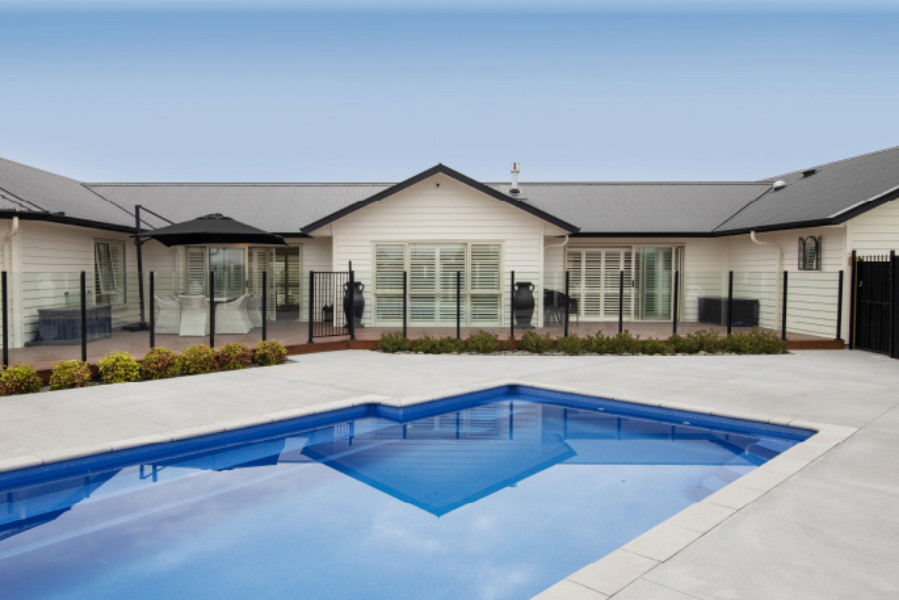 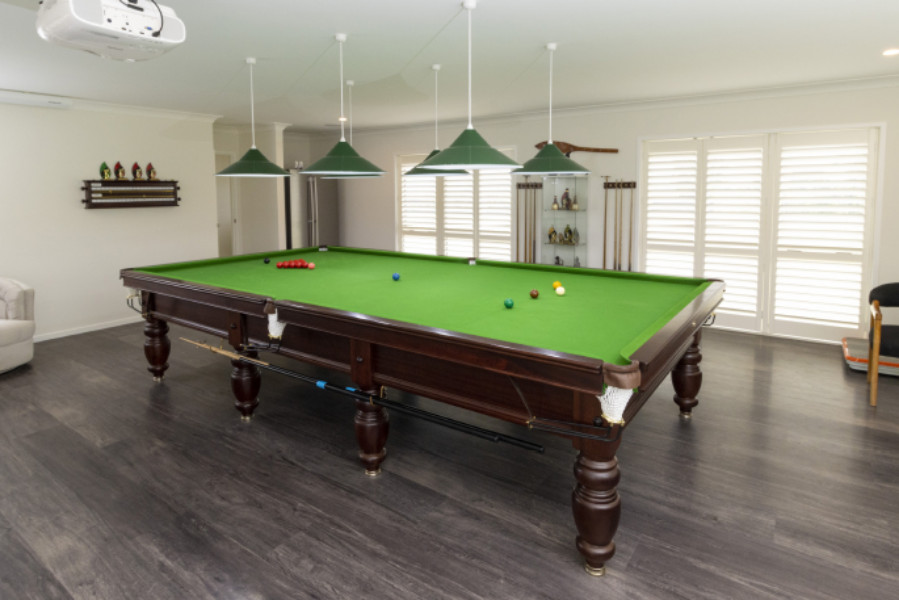 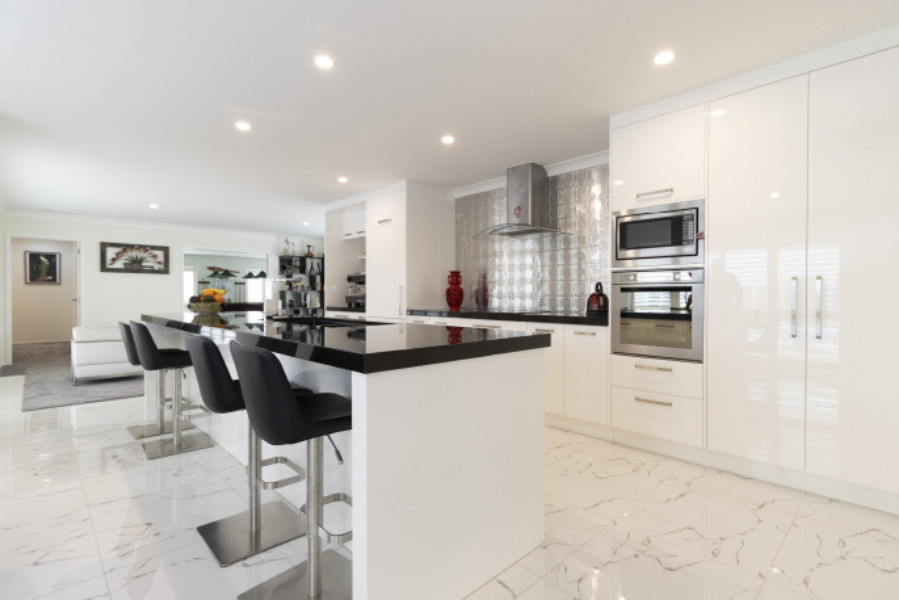 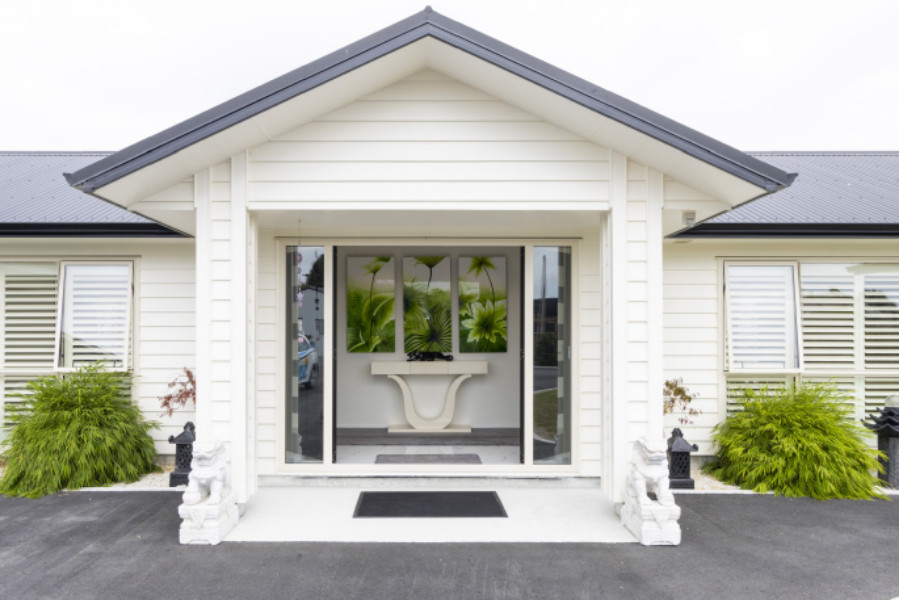 When a large section for sale, covered in gorse and blackberries, caught Michaela Bowden-Martin’s eye on the internet back in 2015 she knew she’d found just what she was looking for.

“We’ve always wanted to build. This section was flat, it was big and it didn’t have any neighbours. I had my eye on it for ages and eventually I drove my husband, Moni Martin, out here.”

The 0.5ha bare section in Pongakawa couldn’t be more different from their former five bedroom two storey home on Cambridge Rd, Tauranga, but Michaela and Moni have poured their heart and soul into building a luxurious dream home from scratch with Golden Homes.

“It is an entertainer’s paradise,” Michaela admits.

“It’s one of the largest projects Golden Homes has built and they were really great to work with. I’ve done the interior décor myself and we’ve built it with re-sale in mind so we’ve put everything you could want into it.”

“We both love playing snooker and we compete in tournaments all around the North Island.”

The pair practise once or twice a day and have installed a projector on the ceiling and remote controlled screen on one wall so they can watch tennis or rugby while they play. A beer fridge and separate toilet is also on hand, making this the ultimate games room.

Deluxe touches can be found throughout this home including ducted air conditioning and underfloor heating beneath the soft grey carpet and white marble tiles from Tile Trends. Michaela and Moni opted for classic white shutters on all windows because they’re easy to clean and can filter sunlight.

“They gave me lots of ideas I would never have thought of and were really terrific,” Michaela says.
Stamp Pressed Metal, based in Auckland, produced eye-catching splashbacks in both the laundry and kitchen.

“Any colour you choose for a glass splashback will date over time.

“This look is timeless, simplistic and easy to clean. I think it looks lovely.”

Twenty solar panels have been installed on the roof to power the home throughout the day, and while they still pay to use electricity at night, they sell some power back to the grid each month.

Moni is responsible for the row of black leather recliners in the lounge that look as though they belong in the gold class section of a cinema. Leg rests are activated at the touch of a button, and USB and power points are cleverly hidden in the arm rests so you can relax and recharge your device at the same time.

“I just had to have them,” he admits.

He also had to have a super-sized coffee machine plumbed into the kitchen.

“I don’t drink coffee, only hot chocolate. But everyone else likes it,” he says with a grin.

After purchasing the land and the neighbouring house in 2015, Michaela & Moni readjusted the boundaries to suit their needs and renovated the old house while their new one was being built. It took well over 12 months for the steel frame drawing plans to be completed and approved due to the workload at that time – and Michaela’s advice to other new build homeowners is to be patient as it is well worth the wait

“Have realistic expectations time-wise because there’s a lot of building going on and you will be held up waiting in a lot of areas. There’s no point getting upset about it.”

The black coloursteel roof and white weatherboards are an extension of the interior colour scheme which Michaela says is based on simplicity.

“I like really clean lines and one colour throughout. If you keep the walls simple you can then dress the house around it.”

Eye-catching artworks and large mirrors can be found in almost every room and Moni installed wooden nogs as the build progressed to ensure they could hang exactly what they wanted, where.
The couple also insisted on timber cladding and wide eaves, having previously had difficulty selling a stucco-clad home.

“It can be really hot and then rain for days. It doesn’t matter if your home is leaky or not, if it’s clad in stucco, buyers will immediately walk away.”

If the inside of this home isn’t impressive enough, the effort that has gone into the outdoor landscaping will blow you away. Michaela and Moni are both keen gardeners and started planting the section before the build even began.

They buy countless shrubs and plants from nurseries and patiently nurture them until they grow big enough to plant out. The long driveway is now lined with mature shrubs such as escallonias, rhododendrons, proteas and several towering palm trees were transplanted from their previous property in Tauranga.

The couple have planted the boundary extensively and Moni is creating an espalier-style fruit tree garden where branches are strung along wires so fruit remains at easy picking height.

Garden sculptures are another notable feature of this property. A pair of foo dog statues guard the main entranceway, and large polished concrete koru sit alongside Japanese-style water features nearby.
A solid white marble dragon is one of Michaela’s most prized possessions and is nestled in between palm trees beside the 9m by 4.2m saltwater swimming pool. At night, the garden, driveway and pool are beautifully lit up to finish off the whole look.

The home is now a haven for their extended family – they have eight children, 19 grandchildren, and five great grandchildren between them.

“We have a lot of visitors and it’s a wonderful house to live in. We’re very proud of what we’ve done.”