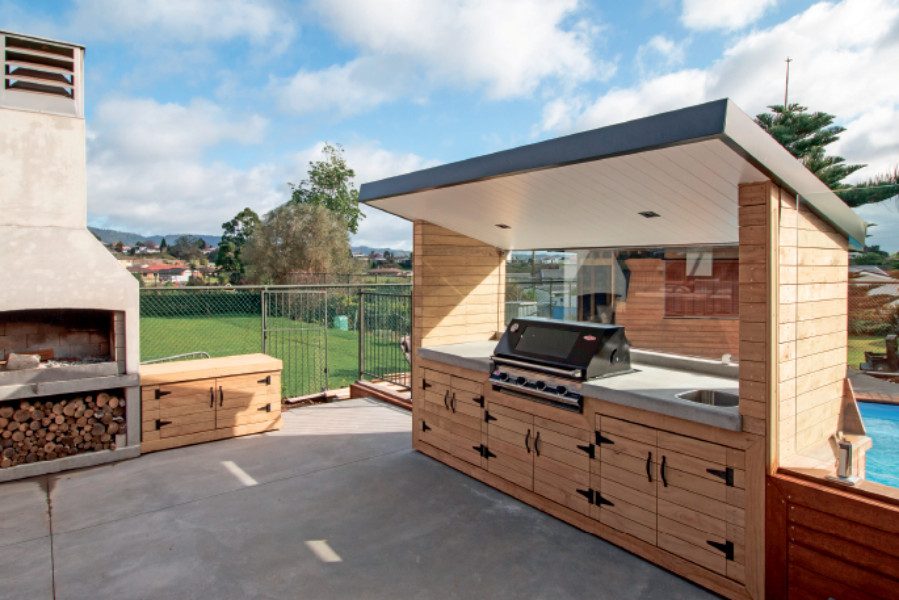 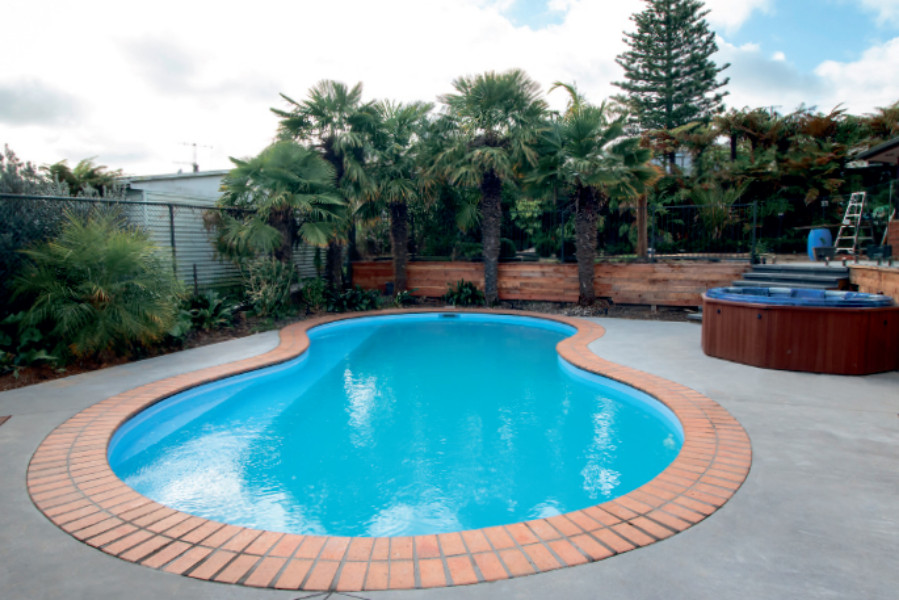 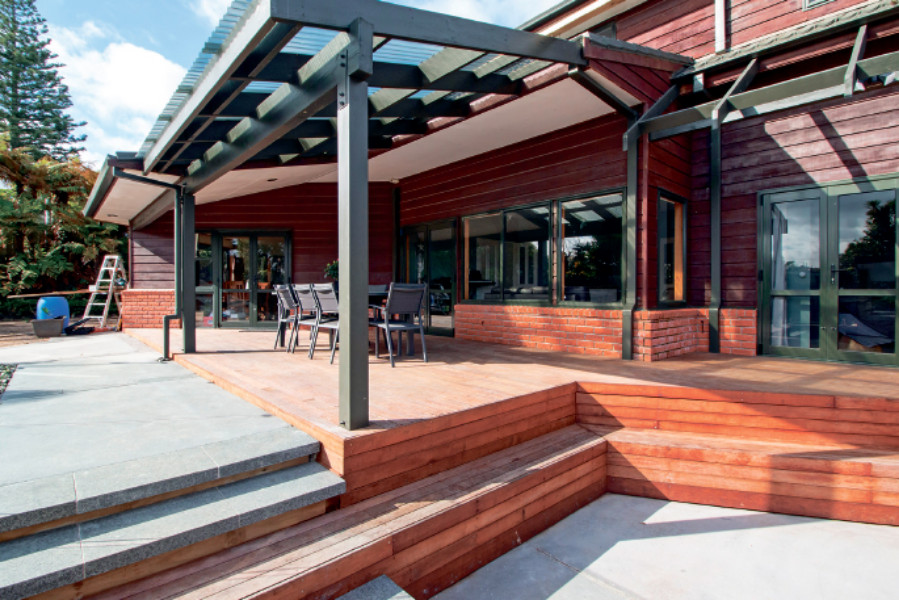 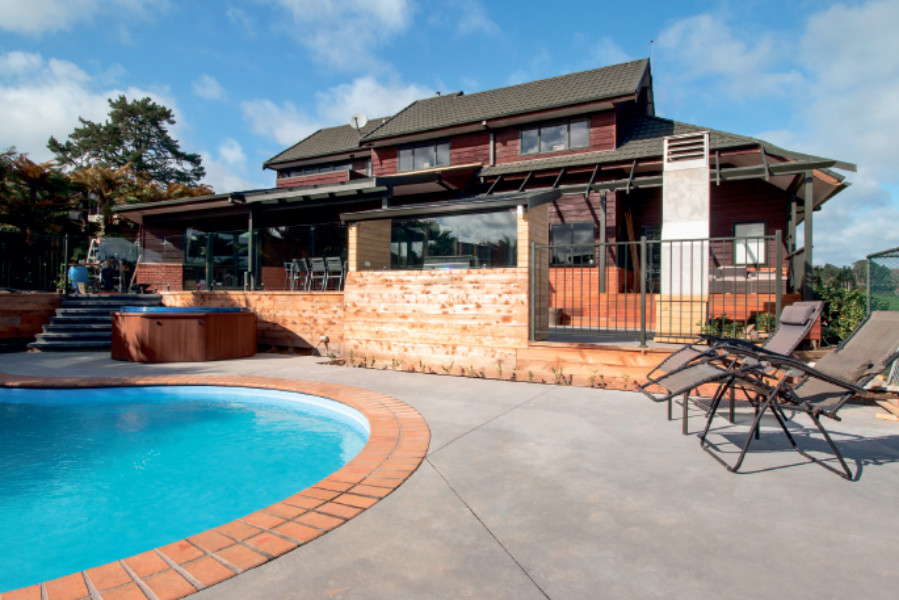 With a huge section, a swimming pool and a neighbouring tennis court, Kim and Brendan Wilson’s home in Te Puke was always meant to entertain a crowd.

But established gardens and retaining walls designed for privacy were getting in the way of how this couple and their four young children wanted to live and play.

“The main issue was we couldn’t see the pool from our deck or living areas,” Kim explains. “When the house was built 20 years ago, the original owners and their neighbour wanted to share the swimming pool and tennis court and allow either family to use it without disrupting anyone. So you could sit on our deck and never even know a pool was there. But for us, that was a problem when we were trying to supervise little kids.”

In addition to the lack of functional space, the Wilson’s deck was also cramped and the pergola wasn’t covered so wind or rain would keep everyone indoors.

Both homes have changed hands in the past eight years and fortunately the neighbourly arrangement of sharing the pool and tennis court still stands. But the Wilsons have spent almost four months transforming their side of the fence into an epic outdoor entertaining space with the help of Logan McLaughlin from Truestyle Pools and Landscaping BOP.

The existing gardens and retaining wall were removed along with a whopping 80m³ of fill. Logan then built a new 1.2m high retaining wall with glass fence panels across the top, which brought the pool into full view of the house.

An impressive pool room has also been built to house the pump and filter equipment as well as provide a changing room and bar area. Cedar shutters have been installed on the front and a small kwila deck has been set into the surrounding concrete to accommodate bar stools.

“The original owners always intended to build a pool house but never got around to it. And when we first moved in, we planned to do the same thing. It’s great to have finally ticked that off the list,” Kim says.

Entertaining flare
An outdoor fire and sunken seating area was also high on the couple’s wish list. “We wanted an outside fire area where we could accommodate a fair few people but that was also intimate enough that it didn’t feel like you’re sitting in a paddock.”

A 3m tall Flare fireplace – which was made locally in Te Puke – now provides a central focal point for family and friends to gather outdoors.

The Wilsons chose a ‘Boston’ style Flare fire, which features clean straight lines, and two large storage trolleys sit either side and can be easily repositioned thanks to Logan’s clever idea of building them on caster wheels. “When we have people over, we can pull the trolleys into the middle and use them as a table to serve dinner,” Kim explains.

“There’s never just six people living here, we always have extras. And our best mates all have big families too so it doesn’t take long for us to fill this space.”

Bigger and better
While the original brief was fulfilled, the Wilsons decided they weren’t done yet – a large outdoor kitchen has also been constructed and features a gas barbecue and sink with running water, both of which are set into a stylish concrete benchtop. Cupboards are underneath and a covered roof hangs overhead, while a glass splashback doubles as part of the pool fence.

“Lots of things got bigger, better and flasher as we went along,” Kim admits. “Our six-week job turned into 15 weeks but we’re so happy with the result!”

Logan worked as a landscaper and pool installer in the Waikato for 12 years before relocating to Tauranga and setting up a local True Style branch in May last year. Even he is impressed with the finished result in Te Puke and is now considering building an outdoor kitchen for himself.

“I’ll probably do one just like it at my place to be honest. I’m really pleased with the way the whole project turned out.”

The Wilsons had previously drawn up plans with another landscaper who was unable to continue with the project. So it was a great relief to meet Logan last year and tap into his enthusiasm.

Kim has previously worked for a relocatable house company and has done plenty of small renovation jobs in the past. To help keep costs down, she decided to pitch in and help Logan wherever possible.

“I told Logan I was happy to do any jobs I was capable of – being the gopher, picking up supplies, painting and the like. He was really cool at keeping me ‘employed’. He managed my control freak tendencies and coped with me changing the plans as we’ve gone along.”

The old and the new
One of the biggest decisions was whether to create a modern outdoor area with an up-to-date colour scheme, or try and tie the new in with the old.

“We decided the house was too big to change the overall look so we made the choice to just be cohesive. That’s one of the trickiest things of working with an existing house.”

The pergola, fascia boards, new outdoor roof structures and pool fence have all been painted karaka green to match the home’s existing joinery and roof colour. The result is a truly impressive outdoor space that will last for decades to come. “We’re very happy with it. We wouldn’t change a thing.”