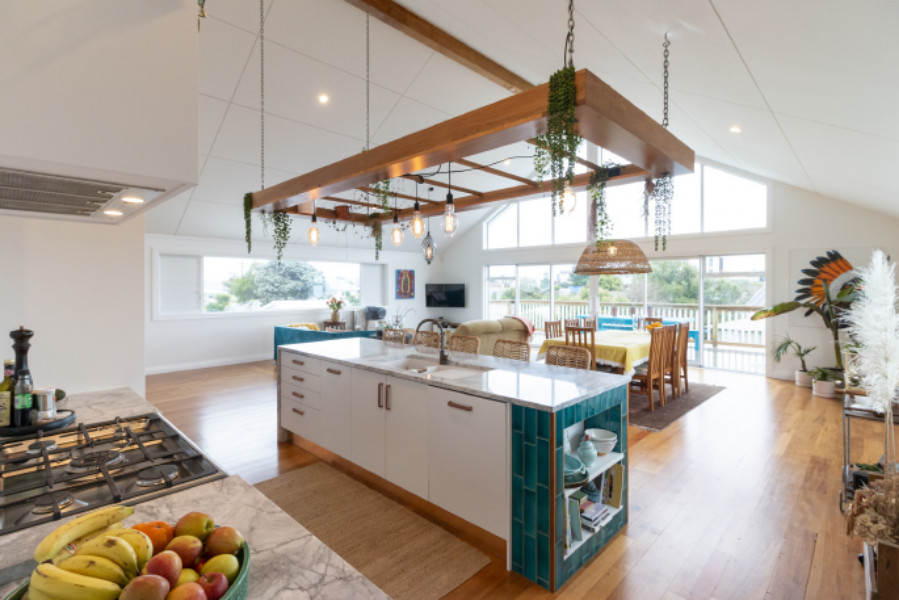 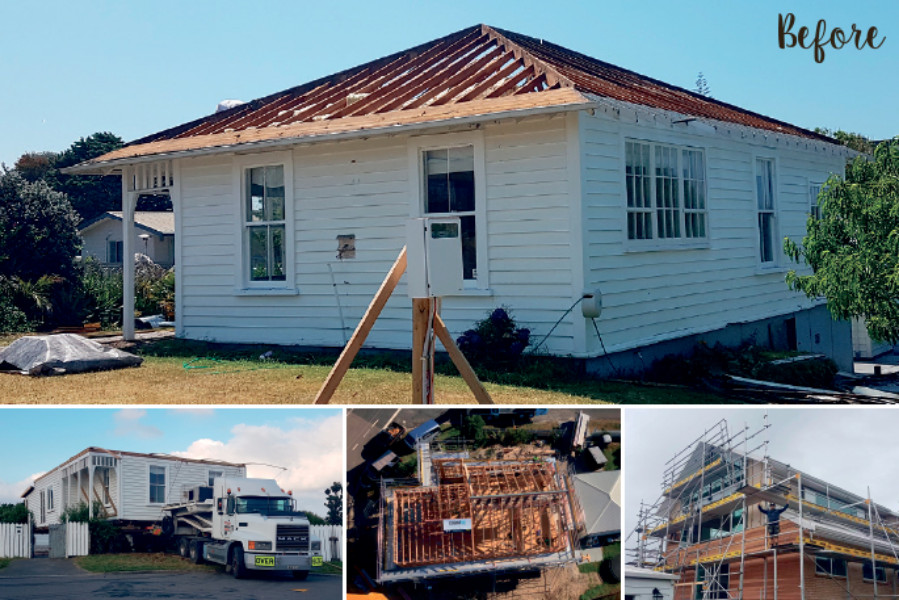 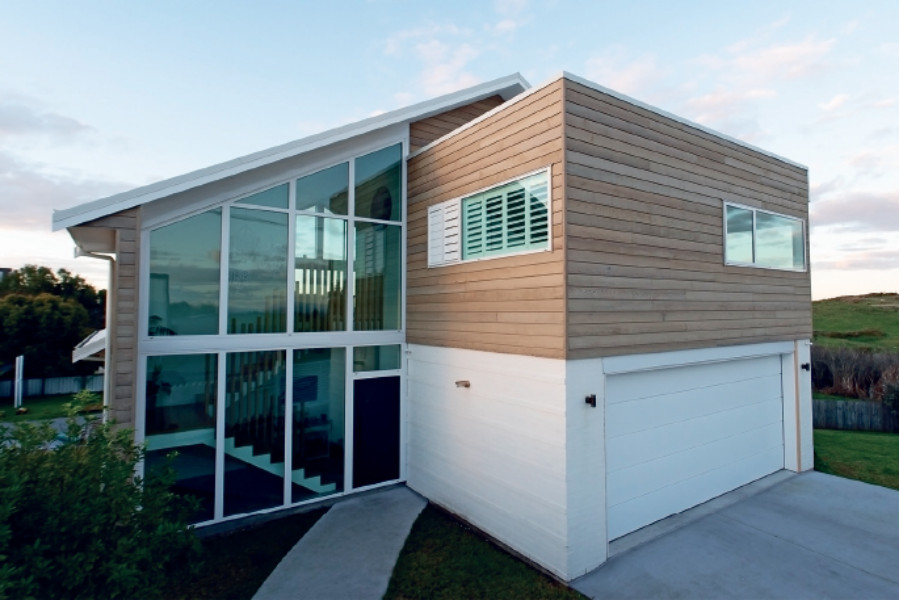 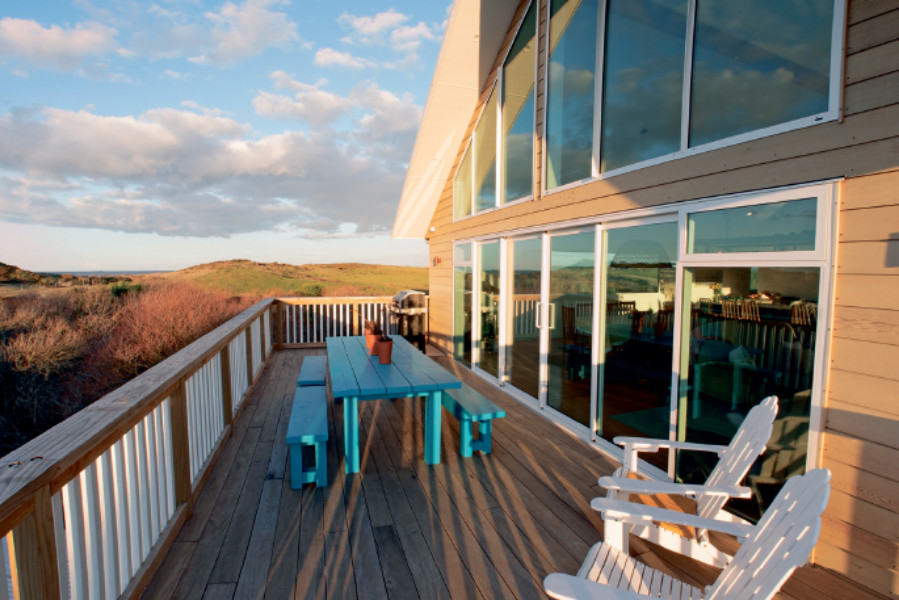 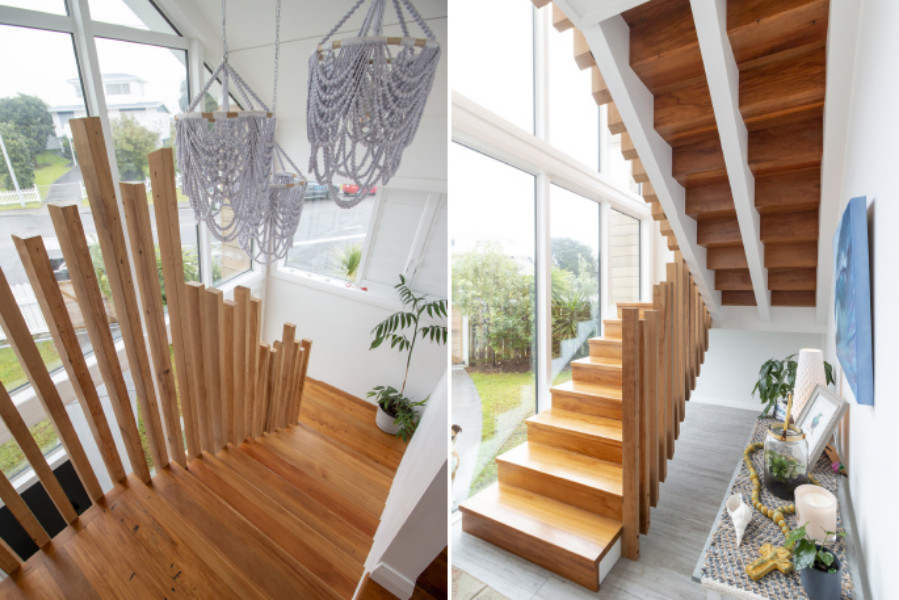 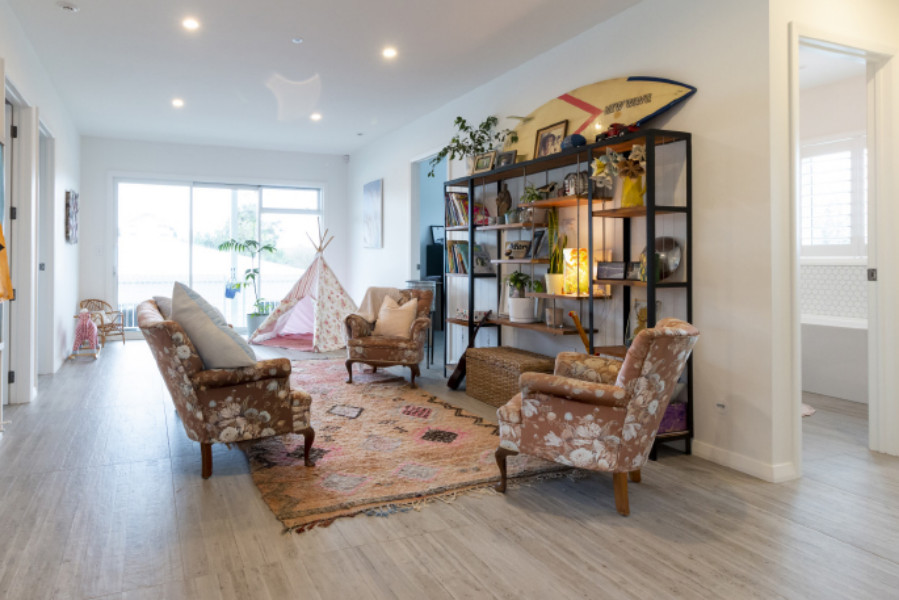 It’s hard to let go of a home you love, so when Jimmy and Charlie Dow decided to start again on their beachside section, they found a special way to hold onto the past.

“Our family and friends used to joke it was a day trip to get here,” Charlie says. “No-one could see the potential but us. But it’s right by the beach with the most amazing view. We felt like we’d won the lottery.”

As the owners of Coast NZ Construction, they originally planned to renovate their home. “It had so much character and was quirky,” Jimmy recalls. “We loved it. But in reality, it faced the wrong way and the old timber weatherboards were a constant battle. Everything was starting to break down. It was 90m² and we’ve got three little kids. It was basically just way too small.”

Instead, they decided to sell the original house for removal and build from scratch. Before it left site, the old roof was removed so it could fit underneath powerlines and a huge quantity of beautiful rimu timber was suddenly at Jimmy and Charlie’s disposal.

“We decided to mill all our old roof framing and make it into our new floor,” Jimmy explains. “We chose three different widths of timber and laid it in a random pattern from the roof framing.”

Charlie helped cut the ends off each piece of timber before it was re-laid and recalls how wonderful the smell was. “It smelt just like our old house. It instantly felt like home.”

Recycling rewarding
Around 80m² of floor in the family’s new upstairs kitchen, living and dining room is now made from the recycled rimu, along with a central ceiling beam, floating staircase, two bathroom vanities and shelves inside a storage closet. The timber has also been carefully crafted to provide corner edges on the impressive 3m-long island bench that takes centre stage in the kitchen.

“Recycling material from our old house has been the most rewarding thing,” Jimmy says. “It’s helped us retain the character of our old home, which is what makes this new home so special. I think it’s important to always remember where you started.”

The five-bedroom, 286m² two-storied home is now a dream place to raise their family. It’s clad in cedar and painted brick, and the layout makes the most of the epic coastal view.

“For a builder, to build your own home is a dream come true,” Jimmy says. “We designed the house at 11pm on a random Tuesday night and we have stuck to that floor plan.”

Tranquil views
The Dow’s location means their tranquil view will never be built out. “There’s a lot of nature on display here,” Charlie says. “The kids will often spot a hawk and everyone will run to the window to see. It’s hard to keep them at the dinner table sometimes!”

A large outdoor deck made of mahogany faces north towards the ocean and Resene Alabaster has been used on all interior and exterior walls. The kitchen is definitely the heart of this home, and a stunning rectangular rimu frame hangs suspended in mid-air above the Brazilian super white granite benchtop. Gorgeous pendant lights and an array of plants drape from the frame, creating an eye-catching centrepiece in the open-plan space.

“I knew I wanted something to bring the ceiling down,” Charlie explains. “It’s five metres high in here and it felt a bit like a chapel. I wanted the kitchen to have its own cosy, snug feel and I saw something similar to this frame in a café and thought it could really work in our space.”

Bright teal-coloured subway tiles have been laid vertically along the front of the breakfast bar, and also feature in the new kitchen’s scullery. The ample storage and bench space is a far cry from their old house, where a fish filleting bench and an old desk flipped on its side were the core components. “We had one cupboard to store all our food, and we cut a hole in the desk to fit a dishwasher,” Charlie recalls, shaking her head.

A pink sink inlaid into the scullery bench is a nod to the family’s feminine side, along with a soft pink concrete sink in the upstairs toilet which Charlie bought in Australia.
Light fittings also make a bold statement throughout this home. A prominent trio of lights in the stairwell feature large white wooden beads and add to the coastal vibe, while others have more of an industrial feel.

Charlie shopped at a variety of lighting and homeware stores and squirreled many purchases away while the house was being built. “Someone said to me ‘If you see something, just get it’. So that’s exactly what I did. I used to occasionally unwrap my light fittings just to admire them during the build, then put them away again.”

“It’s a huge change for us,” Charlie says. “We’d lived here for a while so we knew where the sun was, what direction to orientate everything, and how we wanted to live as a family. We have future proofed by creating the downstairs area for the kids, and upstairs living for us. We have tiled their central playroom so when they’re older, they can come in from the beach with sandy feet and hang out there with their mates.”

Dream backyard
And with a backyard most Kiwi kids can only dream of, there will be no shortage of visitors as the family grows older. Jimmy has installed a mini concrete skate park, a small rugby pitch, complete with goal posts at either end, and a quaint playhouse café.

The beach is a mere 100m away and there are endless sand dunes to explore and outdoor toys to play with.

“The whole point of this place is so we never have to grow up,” Jimmy chuckles.

Floor to ceiling windows in both the entranceway and main living area helps to draw the magic location indoors. Motiti and Plate Island sit just offshore and White Island can be seen puffing away on the horizon.

The couple admit the joinery took up a huge chunk of their budget but capturing the all-day sun and ocean views was essential. A clever shutter system has been strategically installed to capture the cross breeze and cool the place down in summer. “It’s the cheapest form of air conditioning ever,” Jimmy says.

“Plus they can’t fully open so there’s no risk of the kids climbing or falling out.”

The new home was built between March-October 2018 by Jimmy and his crew from Coast NZ Construction. Jimmy’s been a builder for more than 20 years and launched his own company five years ago. The award-winning firm now specialises in renovations and also completes several new builds each year throughout the Bay. They’re renowned for running a transparent open book system, so clients know exactly where every cent is going, as well as their level of dedication and craftsmanship. Coast NZ is a member of the Registered Master Builders Association and won a silver medal in their House of the Year competition in 2017.

Labour of love
Jimmy admits it was a big challenge to balance the house build with family time and running Coast NZ Construction. “It was intense. But at the end of the day, look at the outcome we’ve achieved. This house is next level for us. It turned out even better than we hoped. Sometimes you just have to roll up your sleeves and get on with it.”

The couple are particularly grateful for all the hard work their subcontractors put into the project – much of it at cost – to help them bring their new home to life.

The entire building process was a labour of love but Jimmy and Charlie couldn’t be happier with the end result.

“This house will still blow us away in 20 years’ time,” Jimmy predicts. “You can’t ask for more than that.”