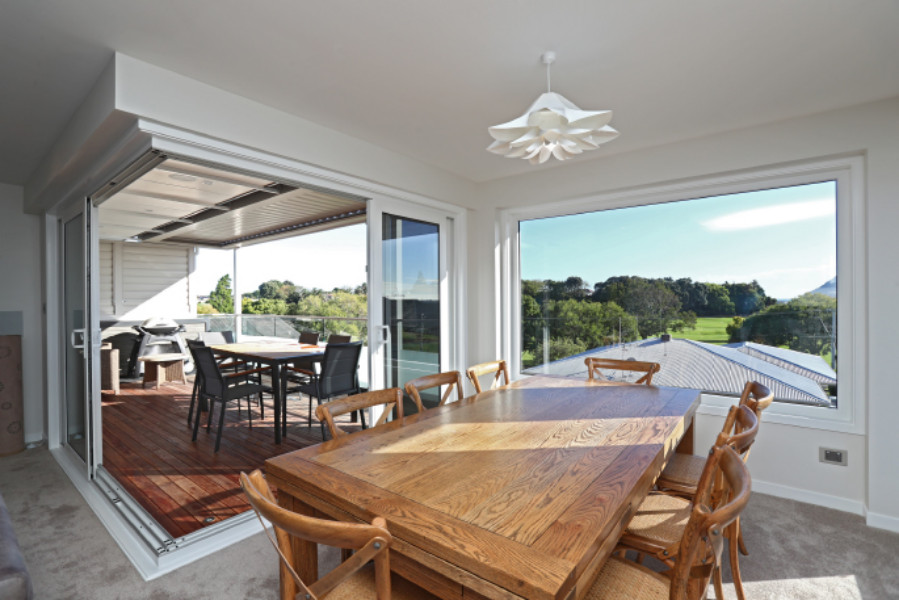 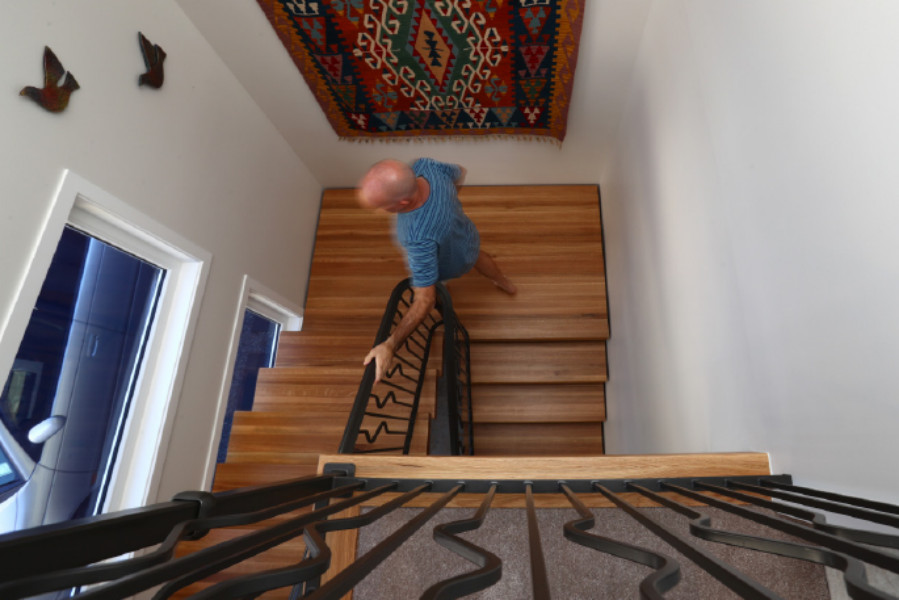 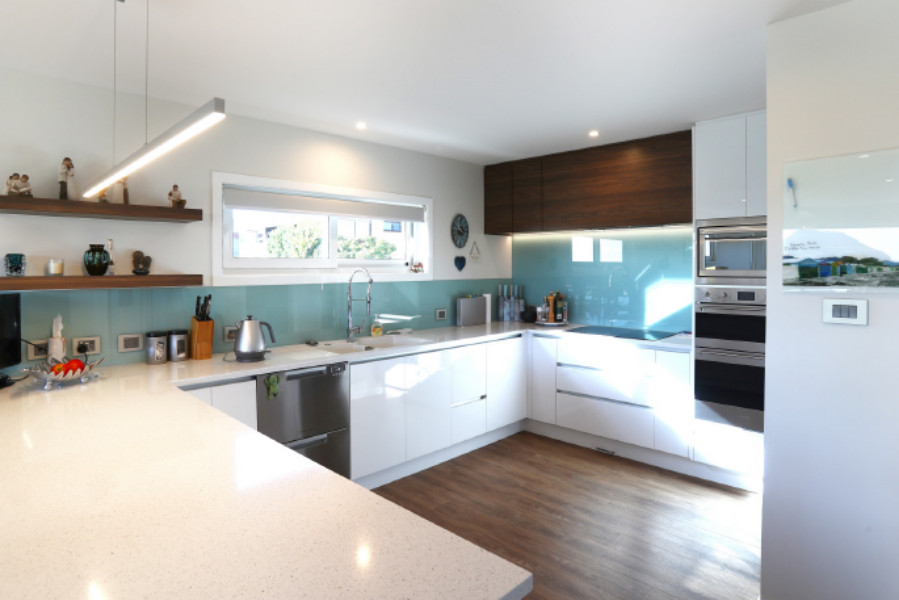 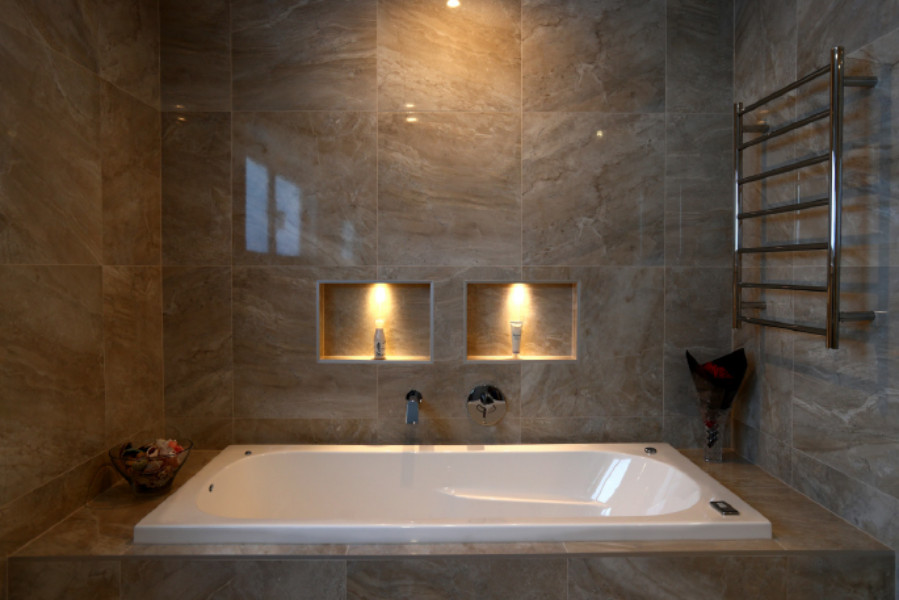 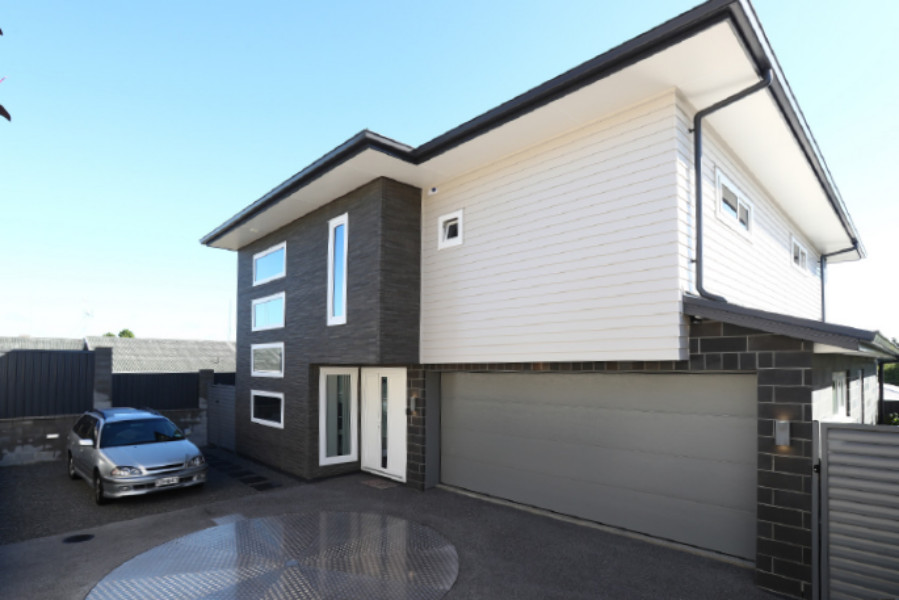 Minimal maintenance and maximum views were the two goals Bureta couple Pete and Amanda Farrell wanted to achieve when building their new home.

The challenge was fitting everything they wanted onto their 345m² site and working around difficult driveway access.

But a willingness to think outside the box and choose products that aren’t commonly used in New Zealand has produced a residence they’re thrilled to call home.

“Because it is a small site and it’s two-storey, any future maintenance is going to need scaffolding,” Amanda explains. “So the products we’ve chosen for the exterior are products that don’t need anything doing to them.”

Bricks cut from basalt stone have been used alongside palliside weatherboard cladding and lightweight textured panels that are normally used on commercial buildings. The Designer Series™ pre-finished cement bonded fibrous wood particle panels create an ultra-modern aesthetic and require no additional painting or sealing. “It’s basically like a lot of little tiles, stacked one on top of the other,” Amanda says. “It looks terrific.”

The couple are originally from the UK and opted to use UPVC joinery – another product which is rarely seen in New Zealand. It has a wide profile and high thermal rating. The Farrells also chose to have argon gas pumped between the double-glazed panels to help reduce noise.

UPVC is made in Germany and was imported by Warmer Windows in Auckland, which then inserted the glass. “The other thing about these windows is they open and close in a different way. You can open them completely inwards but you also have the ability to tilt them to let in ventilation rather than open it. They have really high security locking systems on them as well.”

The Farrells hired Jeremy Damerell from Buildam Construction for their eight-month project and Pete was impressed by his positive attitude and the quality of his workmanship.

“Jeremy was recommended to us. Right from the beginning he was a really good bloke. He was very open to working with those different materials and he was quite excited about doing something that wasn’t your bulk standard home,” Pete says.

The installation of a driveway turntable was another new experience for Jeremy. Tight access meant a turntable was required so cars don’t have to reverse down the 60m-long driveway. Council regulations for driveway gradients provided an extra challenge.

“We were down to millimetres to make it work so the water flowed away and didn’t actually sit on the driveway,” Jeremy explains. “I probably shaped that driveway about five times.”

The extra effort was worth it – the engineer who arrived to install the turntable said the groundwork preparation and foundations were the best he’d seen.

“Jeremy and his team have very good attention to detail,” Amanda says. “He was very confident when we first met him about being able to deliver. Jeremy was very positive, very open to different things. And he suggested ideas to us as well, so it was a two-way process.”

One key suggestion Jeremy made was replacing a grassed area beside the turntable with a grid mat covered in shingle to provide additional parking. He also went into bat for the couple when they were initially told their dining room window had to be split in two, which would have obstructed the view.

“The supplier told us they couldn’t make a piece of glass that big,” Pete recalls. “Jeremy phoned them up and said: ‘I want one piece of glass and I’m not having anything else’. And that was it. We’ve now got a beautiful picture window with a wonderful view of the Mount.”

Everyone involved is particularly proud of the solid American white oak stairs. Amanda says they wanted to create a ‘Wow’ factor when people walked in the front door and the iron balustrade was manufactured locally, based on a picture she found online.

The high-quality kitchen and the covered louvretec deck are other highlights, and central gas heating and a surround sound/Bluetooth system have also been installed.

Jeremy says his biggest achievement was helping take the stress off his clients and delivering the result they were after.

“There’s a lot going on in that site. The logistics and management side were reasonably involved but we made it work.”